IN THE NEWS: Gallatin High School rising, on time and on budget

Touring the construction site of Bozeman, Montana’s new Gallatin High School, the project team talks about their progress and excitement as it takes shape, with a quote from CTA architect Nathan Helfrich.

Neither record snow, nor bitter cold, nor acres of mud have stopped the subcontractors working under general contractor Langlas & Associates.

“Snow in February slowed us down a little bit,” said Roger Davis, Langlas’ project manager. “We spent a lot of time shoveling snow.”

Yet even the roofers worked though the winter weather.

Some 96 workers were on the job Tuesday, he said, including mechanical and electrical crews, plumbers, steel erectors, concrete guys, masons, dry-wallers and fire sprinkler installers.

“It’s going well; the subs are doing a great job,” Davis said. “Everybody is working together. Everybody has a sense of pride working for the school,” he said. “They have kids in the school system. They want to do something good for their kids and their kids’ kids.”

The project is on time and on budget, Davis said. The goal is to finish by June 2020.

It takes imagination to look at the concrete, steel and mud at the school entry and envision what it should look like when finished with big walls of glass, brick and green landscaping.

“It’s getting easier to imagine it every day,” said architect Nathan Helfrich of CTA Architects Engineers.

For the full article, visit the Bozeman Daily Chronicle. 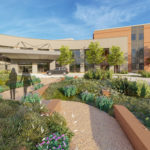 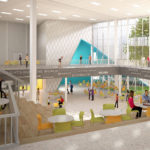