IN THE NEWS: Community to supply ideas for new TVCC education center

The project may be in the pre-design phase, but a newly renovated and expanded career and technical education center has begun in earnest. Treasure Valley Community College, along with its hired architectural firm, has begun gathering ideas for what that center will look like. On Tuesday, the community college began its listening sessions, led by hired firm CTA Architects Engineers, out of Boise. The sessions are designed to gather input from not only college faculty, staff, administrators and board members, but also members of the general public, which would be impacted by such a renovation.

The new name of the building, which lies on the Ontario campus and is currently referred to as the vo-tech building, would be called the Career and Technical Education Center. The current space is 18,000 square feet. However, through remodel and expansion, the plan is to expand the space an additional 12,000 square feet at a cost of $250 per square foot, according to documents previously presented to the TVCC Board of Education.

TVCC hosted four meetings on Tuesday: three meetings to gather ideas, and one for CTA Architects Engineers to meet with the college’s CTE Building Committee to update on the project.

During the noon session, more than a dozen community members were arranged in three separate groups, with a member of CTA staff available for each to write down ideas and facilitate discussion. Also included in the meeting room was a visioning board for participants to share ideas. On a separate board, there were images that participants could place stars on to identify concepts that resonated with them for the future of the center.

“The inside is just as, if not more important, as it’s where the learning takes place,” said Corey Johnson of CTA, as a reminder to the groups at the onset of the session. The discussion hinged on three broad topics: hopes and dreams, what works well, and what is needed. These discussions were brought together and shared with the room as a whole, before each group arranged interactive 3D models with various building elements.

Hopes and dreams, the first topic of discussion, was not just a talk amongst groups on the physical elements of the building, Johnson reminded the room, but could be programmatic as well. “A role model for other campuses,” “Redefine what TVCC represents,” “An organic learning environment,” and “Flexible enough to last 30+ years,” were just a few of the bevy of ideas passed around amongst the groups during the noon meeting.

This isn’t the only one of these listening sessions for the college and architectural firm, said TVCC President Dana Young. The next session will be held on Monday, Oct. 22, at 6 p.m., at a location to be determined on the Ontario campus. According to CTA, the next steps for the project as a whole are as follows: schematic design, design development, construction documents, plan review, bid and award [construction contractor] and construction.

The timeline for the project is tentatively set for 18 months. Tentatively, bidding for a contractor would happen sometime in January of 2019, with construction tentatively set for March of 2019, substantial and final completion in May of 2020, and a tentative move in between May and July of 2020.

“The content and insight that came from these initial TVCC listening sessions surpassed our expectations. The community, industry, and educational partners, as well as the TVCC faculty and staff, really dug-in and gave us the inspiration, vision, and idea generators we needed to launch into some early exploratory concepts. Our main mission is to create a flexible, highly utilized, technologically superior, innovative center that equips students with the most advanced job force training in the region. The CTA team is really jazzed to start designing just that!” 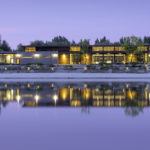